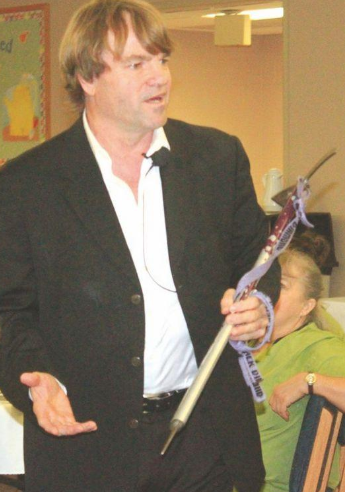 After a traumatic boating accident, doctors battled to save his life and revive him after he was clinically dead two times. They succeeded both times.

After years of trials, turmoil, and challenges, Huston has become a world-renown inspiration. Thursday night the residents of Moundridge were given the chance to meet this author and motivational speaker at the annual Chamber of Commerce dinner.

“This is life for me,” Huston said. “When I’m not traveling and speaking is when it’s hard for me.”

During a water-skiing trip in eastern Oklahoma, Huston found himself in the water with the boat holding his family and friends backing up toward him. Despite his frantic yelling, no one could hear him, and he was hit, his legs sucking into the propeller. After being thrown around by the powerful propeller, his father reached into the bloodred water and pulled him out. His legs were mangled.

At the dock, there happened to be a doctor and nurse who gave him first aid and called an ambulance. At the first hospital, he was sent to, the emergency room doctor was overheard telling his staff, “I don’t think this kid is going to make it.”

From there he was transferred to a larger facility where he died on the operating table, not once, but twice. When he woke up, he found his right leg didn’t have any skin on the back. After sewing his hand to his leg to increase blood flow, they grafted skin to his leg and covered him in a body cast.

After spending time in a wheelchair, on crutches and in a metal brace, it was clear that his body wasn’t going to be the same. His right leg was paralyzed everywhere below the knee. The former teen athlete now had a leg that was, for lack of a better word, useless.

“I was always playing football as a kid,” Huston said. “Now I couldn’t even sit in a chair at school for too long, because my spine stuck out from all the weight I had lost.”

For seven years, Huston struggled with a leg that no longer listened to him and worse. It was no longer able to tell him when something was wrong. He would step on nails or glass and not feel it. He’d get home, take his shoe off and find a bloody, mess. Eventually, he battled infections.

“It was pretty disgusting,” Huston said.

That’s when I realized that, in one way or another, everyone has challenges,”

The first step on his prosthetic leg, which was not as advanced as prosthetics are now, was excruciating. Of course, for the pain, doctors prescribed him painkillers. After a couple of years, he found himself addicted to those painkillers. His addiction came to a head one day when he found himself believing he had overdosed. In that moment, he asked God for a chance to make it right.

He didn’t overdose, and since that day, he has taken only two painkillers in his life — one after having his wisdom teeth removed, and one after he twisted his one remaining ankle. He doesn’t drink alcohol or even soda pop.

Huston went to grad school and became a psychotherapist. While working in California, he met a woman. They married quickly because she was from New Zealand, and there were immigration issues to consider. After two years of marriage, once she had received her citizenship, Huston came home to find her gone. They had agreed to move prior, so he had quit his job and already had given notice they were vacating their home. He was left with no wife, no job, no home, and his bank account had been cleaned out.

Shortly after he received a letter from Chicago requesting him to be a part of a team of people who had disabilities who were going to climb the highest elevations in all 50 states. He began training immediately. After 16 years of not running, he began running again.

“I discovered something about running,” he said with a laugh. “I hate it!”

One month before the expedition was set to start, it was canceled. Huston still wanted to do it, so he decided to raise the $50,000 necessary for him to go. John Shanahan, the owner of Hooked on Phonics, heard about the expedition and was impressed. He donated all of the money necessary for the trip.

So off Huston went. Every state, every elevation. From the highest point in Delaware, in the middle of a street, to the 23,323-foot Mt. McKinley in Alaska. And yes, even Kansas.

“Which wasn’t that difficult, I’ll tell you,” he said.

He encountered wild animals on his journeys, such as bears, rattlesnakes, and wild horses. He suffered sunburns in places he thought couldn’t be sunburned, such as the roof of his mouth. He slept in a tent and burrowed into the snow for shelter from blizzards and avalanches. In his home state of Oklahoma, he found a class of fifth-graders waiting for him at the top of Black Mesa to cheer him on and hear his story.

Huston not only did what many thought was impossible, but he also did it fast. Really fast. The previous record-holder, Adrian Crane, climbed the 50 states in 101 days. Huston did it in 66 days, 22 hours and 47 minutes, making him the new record holder. Not only that, he is now the only disabled person in the world to break an able-bodied sporting record. It was tough, frightening and chaotic.

“Fear is not real, it only exists in your mind,” Huston said. “Fear nothing and love all. Love will make you climb mountains.”

Huston has been on CBS, NBC, ABC, CNN, TBN, C-SPAN, Inside Edition, Extra and Robert Schuller’s Hour of Power. He’s been featured in Sports Illustrated, L.A Times, Wall Street Journal and Forbes. He is the author of “More Than Mountains: The Todd Huston Story,” which is being adapted into a screenplay. For more information on Todd Huston, visit www.toddhuston. com.