Dealing with struggles makes us stronger 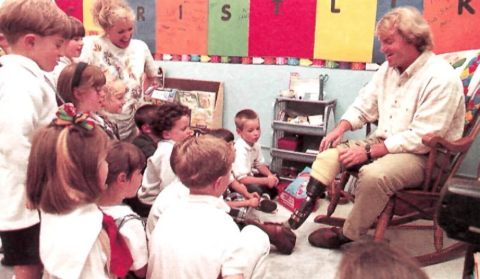 So many people these days moan about being a victim of something. They can’t live up to their full potential in life because somebody did something to them that they can’t get over or they were a victim of circumstances. After that, why try to make a success out of your life? If you are a victim, failure is not your fault

That is why it was so good to get to meet Todd Huston last week. At the age of 14, he was being pulled by the family ski boat on an Oklahoma lake. He got entangled in the rope attached to the tube he had been riding on and the boat started backing up.

He screamed for someone in his family to stop the boat, but nobody heard him over the sound of the motor. His legs got caught in the propeller of the boat.

He was technically dead twice before his condition was stabilized in the hospital. He kept both legs but had no feeling in his right leg.

Todd went from being a student-athlete to being the kid on the sidelines wearing a Forrest Gump-like brace. Bone disease set in and eventually forced him to have his right leg amputated below the knee at age 21.

He had to learn to walk again using an artificial leg. He describes how he fell many times during the learning process. “It is not how many times you fall that counts, but what you get back up every time,” Todd says.

If anyone could claim to be a victim, it was Todd. The genuine horror he went through could easily have destroyed his life.

He did what anyone would have done.

He asked over and over again: “Why me,

But he decided that God must have had a reason for keeping him alive. Todd says we should all do our best because you never know what greatness is being prepared for us.

Todd became a psychotherapist and clinical director of the Amputee Resource Center in California. He also worked in psychiatric hospitals for adults, adolescents, and children.

He married a woman from New Zealand, but after two years she became an American citizen and left him after cleaning out their bank account.

In the middle of this despair, another door opened. He was offered an opportunity to climb the highest mountains in all 50 states with a group of handicapped people. He signed up for it, but the project was canceled because the funding didn’t come through.

Rather than feel sorry for himself, Todd decided he would raise the money and do the mountain climbing himself.

He started by printing t-shirts that he sold for $12 each. The man who had started Hooked on Phonics heard about what he was doing and agreed to fund the entire adventure.

Using an artificial leg with a built-in shock-absorber, Todd did the unimaginable. He completed a world-record-setting Summit America expedition by climbing to the highest elevations of all 50 states in only 66 days, 22 hours and 47 minutes. He beat the previous record set by a man with two legs by 35 days.

On one of his climbs, Todd met a man who was a publisher. He heard Todd‘s story and wanted him to write a book about his adventures. Todd wrote “More Than Mountains: The Todd Huston Story.” The book has been an inspiration to millions of people. This man who could have let his life be ruined by one horrible thing has gone on to be featured in thousands of publications around the world. He has been covered by Sports Illustrated, Forbes and the Wall Street Journal as well as the popular book, Chicken Soup for the Soul A Second Helping.

He has appeared as a special guest on CBS Year in Sports and Robert Schuller’s Hour of Power. He has been interviewed on ABC, NBC, CBS, CNN, TNN, Inside Edition, and Extra plus numerous national

radio programs. Most people would have thought he would never amount to anything after that boating accident. He could easily have spent his life on painkilling drugs and nobody would have blamed him because he was a victim come to the bad things that had happened to him and succeed.

There is a lesson to be learned for all of us from his story. Nobody’s life is perfect. It is not that we avoid obstacles in our lives that define us. Instead, it is how we deal with them that determines our character.

Jim Harris is chief of staff in the Saline County Circuit Clerk’s office.