Meet the Champion of Overcoming Adversity

Todd Huston has overcome every challenge he has faced. From losing his job to losing his wife and even losing his life – twice – Huston has come out the winner every time. Adversity, it seems, is simply no match for the 52-year-old Oklahoma native.

And when life’s challenges weren’t enough, Huston created another seemingly impossible challenge – climbing the highest peaks in all 50 states in record time. Huston, who was the featured speaker at Umatilla Electric Cooperative’s 77th annual meeting Saturday night, accomplished the feat in 1995 in just 66 days, shattering the old record by 35 days. And, oh, by the way, he did it on one leg.

Huston was 14 when his right leg was torn up by a boat propeller. He lost so much blood that he overheard a doctor say, “I don’t think this kid’s going to make it.” And he almost didn’t. Doctors had to resuscitate him twice – once in the emergency room and again on the operating table. After his initial surgeries, the damage was so severe, doctors told him he would probably never walk again. But Huston is nothing if not determined. Even after his leg was amputated and he was fitted with a pathetic excuse for an artificial limb (Huston compared it to a tree limb with a shoe attached), he didn’t give up.

But there were moments of anguish when he would find himself asking, “Why me?” The answer didn’t come immediately. First, he had to learn to walk again. Then he became addicted to pain killers. At one point, he nearly overdosed before he found the strength – and desire – to kick the habit.

“When you really want to change something in your life, you can do it,” he said. “It only takes an instant to make the decision.”

That may sound glib and simplistic, but Huston said it really is the first step to overcoming any challenge one might face. After that, you have to delve deep into your soul for the strength to move forward.

“You have to look for something within you that is stronger than anything the chaos of the world can throw at us,” he said.

Huston overcame his addiction, worked to earn a degree in finance, got married to a New Zealand woman and settled into a happy, successful life. But adversity wasn’t through messing with Huston. In one particularly bad week, Huston came home shortly after losing his job only to find his wife was gone. It turns out, she had married him so she could remain in the United States long enough to obtain her U.S. citizenship.

By this time, however, Huston was getting pretty good at getting back up after being kicked to the ground.

“No matter how dark things get, there’s always something positive that will come,” he said. “Too many people focus on the darkness and make it part of who they are. Let go of the darkness and look for the good and it will show itself.” 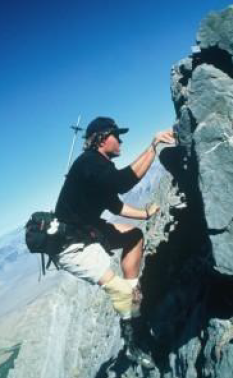 Huston is shown here climbing without the aid of a rope during his 1995 expedition in which he scaled the highest peaks in all 50 states.

Huston left the world of finance and became a psychotherapist and clinical director of the Amputee Resource Center in California, working with others to overcome their own challenges. But Huston wasn’t done taking on his own set of challenges. One day, he saw an announcement of a planned expedition that was seeking physically-challenged people to climb the highest peaks in all 50 states. He immediately signed up and began training for what promised to be his most daunting challenge yet.

Then, one month before the expedition was to begin, the funding fell through.

“But I heard a voice in my head that said, ‘Do this climb on your own.’ Sometimes you have to step out of the box that you created. You know you’re much bigger than any box.”

So, Huston began selling T-shirts to raise the $50,000 needed to fund his own expedition. This, it turned out, was the easiest of all the obstacles Huston has ever faced. A wealthy businessman heard about Huston’s plan and was so intrigued and impressed by the idea of an amputee attempting to climb the highest peaks of all 50 states that he personally funded the entire expedition.

“I don’t know if he even got the T-shirt,” Huston said.

And so, with the help of some experienced climbers, Huston began his 50-state journey up and down the tallest peaks. Some were more challenging
than others. For example, the highest elevation in the state of Delaware happened to be in the middle of a city street. Alaska’s Mount McKinley,
however, proved to be much more difficult and much more treacherous. At more than 20,000 feet in elevation, the trek up the mountain was slow, arduous and dangerous.

The climb was chilling in more ways than one. He and his fellow trekkers came across two bodies – climbers who died attempting to reach the peak. They had to dig deep pits in the snow to protect themselves overnight from hurricane-force winds. But they eventually reached the peak and completed the expedition is record time – and without the aid of ropes to protect them if they slipped and fell. Throughout the expedition, Huston encountered danger beyond the climbs themselves. There were rattlesnakes, bears, extreme weather (including 118-degree heat while ascending the 8,751-foot tall Guadalupe Peak in Texas) and, of course, personal fear.

Fear, said Huston, is what holds most people back from accomplishing their goals.

“Danger is real,” he said. “But fear is something we create within ourselves. Always recognize danger, work to minimize it and then move forward as best you can.”

And Huston is an expert on that subject.